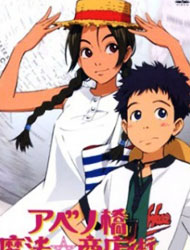 Plot Summary: Childhood friends Arumi and Sasshi are residents of the Abenobashi commercial district in Abeno-ku, Osaka. After an accident, they find themselves transported to an alternate sword and sorcery world. Their attempt to get back to reality finds them traversing a series of nonsensical worlds built on science fiction, war, fantasy, dating sim games and American movies. Each alternate Abenobashi is a surreal manifestation of Sasshi's otaku interests, populated by analogs of the protagonist's relatives and acquaintances and a blue-haired stranger known as Eutus.