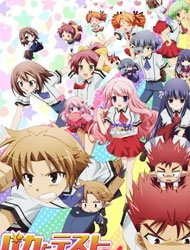 Plot Summary: Continuing from where Season 1 left, the story continues with a more in depth into the characters but with the same humor narrative as before.