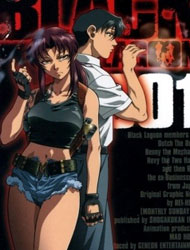 Plot Summary: Okajima Rokuro is a Japanese businessman in a town full of Japanese businessmen. His normal day consists of social drinking with clients and being kicked around by his bosses. He finally gets a break though, as he's sent by his company to the tropical seas of Eastern China to deliver a disc. But his boat gets hijacked by a band of mercenaries hired to retrieve the disc. Rock (as he is newly dubbed by his captors) catches the interest of the only female merc Revy as she thinks he's worth a ransom, taking him hostage. However, the disc that was stolen has a terrible secret that's unknown to Rock, which causes massive confusion and chaos for both him and his kidnappers