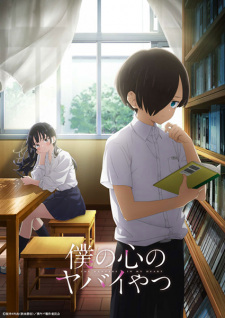 Boku no Kokoro no Yabai Yatsu

Plot Summary: Kyoutaro Ichikawa may look like your average middle school student, but in his heart, he dreams of murder. Thus, it is no surprise that the one he wants to kill the most is never far off from his mind: the class idol, Anna Yamada. Reading alone in his beloved school library, he inadvertently begins to rendezvous with Yamada, who comes to secretly gorge on her beloved candies and sweets. Through their interactions, Ichikawa discovers just how much of a ditz Yamada is, and can't help but support her from the sidelines. Meanwhile, Yamada herself can't help but tease Ichikawa relentlessly due to his flustered reactions. With an array of heartwarming daily interactions, the distant bond between the two grows into something more than just library acquaintances. Perhaps, in time, Ichikawa will come to realize that his murderous desires have turned into something else entirely.

Other name: The Dangers in My Heart; 僕の心のヤバイやつ

Boku no Kokoro no Yabai Yatsu