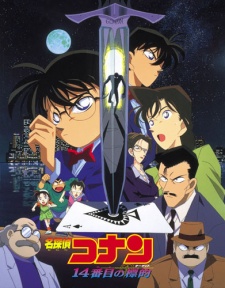 Plot Summary: Ran has a nightmare about her mother dying, but starts to remember what really happened involving herself, her mother, and her father from 10 years ago. Meanwhile, people are being injured by a certain culprit. Conan soon realizes that these people all have some kind of relation to Mouri, and that they all had a number in their name corresponding to a playing card and were being targeted in order, from the king down to the ace. The police soon decide that a murderous card dealer who just got out of jail and wanted revenge on Mouri is behind it. However, as injuries become murders and it is a race to predict who the next victims will be, Conan soon finds that the truth is something completely different, while learning about the incident from 10 years ago in the process.