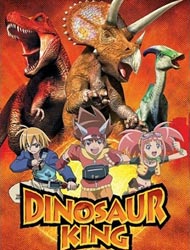 Plot Summary: Max, Rex, and Zoe are three friends that are members of a group known as the D-Team. They just want to have fun and build their friendship, but that all changes when they find three fossil shaped items in the forest. Before they know it, the D-Team is thrust into a quest to save prehistoric dinosaurs, trapped as cards, from a mysterious time traveling organization known as The Alpha Gang. Whichever group can gather all the cards first will become the Dinosaur King.