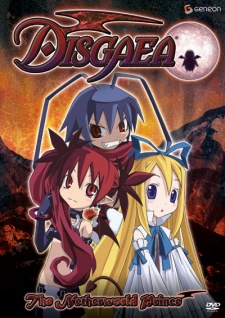 Plot Summary: From the darkest realms of another dimension emerges the story of Laharl, the son of a demon overlord, and his two sidekicks: his impish servant and an angelic assassin. Awoken from a two-year, poison-induced nap, Laharl learns of his father’s demise and blazes a trail of destruction on his quest to declare rule over the Netherworld. Never skimping on the wisecracks, the diabolical prince and his accomplices battle dragons, sorceresses, robots, power-hungry humans, and corrupt angels. Based on the popular adventure games, Disgaea lunges at you with a full-force attack. You can laugh, cry, scream or squirm, but you can’t escape the wrath of Laharl, dood!