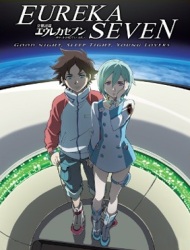 Plot Summary: Renton, son of scientists, and Eureka, a girl who can't live under the sun, are raised together when very young and become very attached to each other. One day, Eureka is taken away. Powerless at the time, Renton vows to rescue her. He enters the military and is soon is assigned to the Independent Youths Unit 303 of the First Mobile Forces thanks to his exceptional performance alongside his Nirvash, a bio-mechanical armor/control system. Unknown to Renton, lies a plot to extinguish the alien invasion that is currently happening involving not only him, but Eureka too.