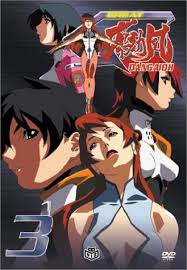 Plot Summary: A mysterious explosion on Futagami Island begins a new chapter in the Dangaioh mythos! Led by the evil Professor Katou, a band of warriors calling themselves the "Tartarus Knights" have begun their campaign to lay waste to the world by way of a small research station on Futagami Island. Katou's victory seems almost certain until he encounters an advanced fortress guarding the island. From it, a group of three humanoid robots are launched—Dangaioh!