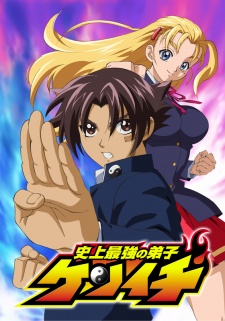 Plot Summary: "Weak Legs" Kenichi Shirahama would rather spend his time reading self improvement books than fighting. However, when he finally works up the courage to become strong and join his school's karate club, he is coerced into fighting a bullying upperclassman who is intent on getting him kicked out of the club. He is about to give it all up until he falls for his mysterious new classmate, Miu Furinji. In order to face this challenge, he undergoes rigorous training at the dojo she lives at, Ryouzanpaku. Some initial training by the masters there allow him to defeat his upperclassman, however his fighting prowess brings him to the attention of the powerful gang of delinquents, Ragnarok. Wishing to protect the things he loves and determined to have the strength to face the increasing adversity, he must learn various martial arts from the dojo's resident masters, taking Karate, Muay Thai, Ju Jitsu and Chinese Martial Arts and combining them to create his own fighting style!