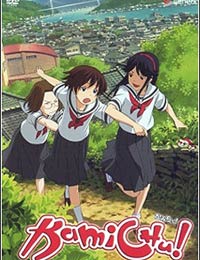 Plot Summary: Yurie Hitotsubashi was just an average middle school student living in the city of Onomichi on Japan's inland sea in the easygoing times of the 1980s. She spent her days worrying about exams and trying to get Kenji, the clueless boy she likes, to notice her. Then during lunch one day she suddenly announces to her friend Mitsue that the night before she had become a goddess. Their classmate Matsuri quickly latches on to Yurie's newfound divinity as a way to promote her family's bankrupt Shinto shrine. She hopes that replacing their hapless local god, Yashima-sama, with Yurie will make the shrine more popular (and profitable). Now, with Matsuri as her manager, Yurie has to grant wishes, cure curses, meet aliens, and attend god conventions. All the while attending school and working-up the courage to confess to Kenji.