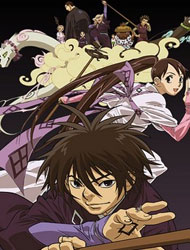 Plot Summary: Sumimura Yoshimori, a 14-year-old junior high school boy, is a descendant of the Kekkaishi, or an exterminator of monsters. He is vying for the heir to the family with Yukumura Tokine. Tokine is older than him, and she is his childhood friend as well as his rival Kekkaishi. To save people from the crises, and to make himself stronger, Yoshimori fights against monsters at night.