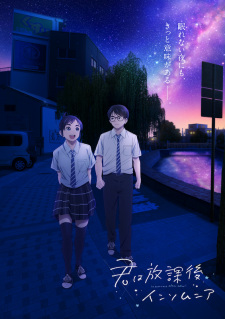 Plot Summary: It all started with the death of one of the Astronomy Club's members. From this, the rumored ghost of the club came to life. Grumpy insomniac Ganta Nakami stumbles across the moderately rebellious yet easygoing Isaki Magari in the Astronomy Club's abandoned observatory. Magari is jolted awake and tries to escape from the scene, only to have a broken door prevent that, forcing the two inside. The two forge an unlikely friendship, leading them to use the observatory as a safe space for them to interact. Kimi wa Houkago Insomnia follows the insomniacs Nakami and Magari's time in the starlit observatory as they help each other cope with insomnia and the lasting effects it has on student life.

Other name: Insomniacs After School; 君は放課後インソムニア