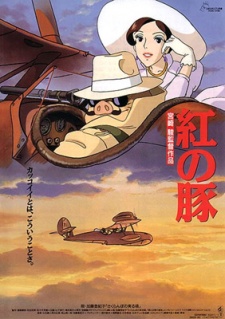 Plot Summary: Porco Rosso is a veteran WWI fighter pilot turned bounty hunter, who has been transformed into an anthropomorphic pig through a rare curse. He was once known as Marco Pagot while still in his human form, but took up a new alias which suits his current image better, "Red Pig." At the beginning of Kurenai no Buta, Porco is reunited with his long-time friend Gina at a hotel, and unexpectedly falls in love with her. Despite his strange form, Gina shows him all the affection that she can muster. But Porco has a love rival to deal with. An American ace fighter named Curtis is also after Gina's heart, and although she rejects his proposals, he is not about to let her go so easily. During his return flight to Milan, Curtis sneaks up behind Porco's plane and shoots him down. The plane is completely destroyed and Porco is proclaimed dead, but due to a stroke of luck, he barely managed to survive the crash, unbeknownst to others. Porco must now continue his journey back by train, and suddenly discovers that there has been a warrant issued for his arrest in Italy. Not only does he need to find Gina, but he must also get his revenge and also deal with the oncoming war that threatens the whole of Europe.