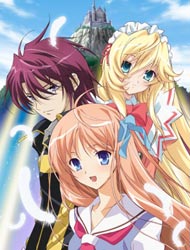 Kyoshiro to Towa no Sora (Dub)

Plot Summary: Kyoshiro to Towa no Sora revolves around the life of Kuu Shiratori, a seemingly normal high school girl who enjoys her school life in the giant city Academia, which is thought of as a symbol of recovery for humanity since already ten years have passed since the greatest disaster mankind had ever seen, occurred. Kuu has recently been having a recurring dream where a prince meets her and takes her away. One day, while all the students at her school are preparing for the upcoming school festival, the prince, whom she has met several times in her dreams, appears. The prince, Kyoshiro Ayanokoji, requests of her just as he had done in Kuu's dreams, "Let's go... together..."

Kyoshiro to Towa no Sora (Dub)