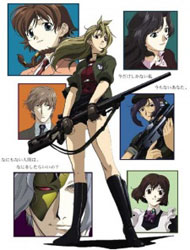 Plot Summary: In the country of Gazth-Sonika, civil war rages. There, a mercenary called Madlax plies her trade, with almost supernatural skill. In the seemingly peaceful country of Nafrece, Margaret Burton lives a tranquil life. As separate as their lives may seem, the two are connected by ties of mystery, and by a holy book that is also sought by the shadowy organisation, Anfan. As Margaret and Madlax follow the path of their destiny, they come ever closer to uncovering the truth - with no guarantee that it is a truth they can bear to learn.