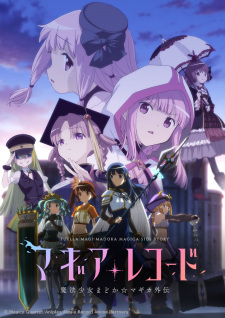 Plot Summary: After a daring escape from the Memory Museum, Sayaka Miki returns to Mitakihara City with unsettling news. Troubled by what she has learned, Sayaka reveals to Madoka Kaname and Homura Akemi the whereabouts of Mami Tomoe—but more importantly—the disturbing truth behind the existence of magical girls. Despite knowing the cruel fate that awaits them, the three quickly resolve to work together and save Mami once and for all. Meanwhile in Kamihama City, Yachiyo Nanami hunts various "rumors" in search of Hotel Fendt Hope, the headquarters for the Wings of Magius. The magical girl organization is Yachiyo's only lead in finding Iroha Tamaki, whose disappearance remains shrouded in uncertainty. Determined to reunite Team Mikazuki Villa, Yachiyo swears to destroy the Wings of Magius and put a stop to their insidious plans. Amidst the turbulent situations, a calamitous threat approaches, presenting a dire conflict set to jeopardize the entire world.