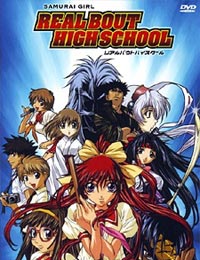 Plot Summary: At Daimon High School, kids settle their disputes by dueling with each other in the school's official K-Fight battle arena. Ryoko Mitsurugi, samurai girl and undefeated K-Fight champion, is called upon by a mysterious Priestess to protect the Earth from an invasion coming from the alternate universe of Solvania. She must face battles that will test her skills, her friendships, and her heart in order to find her true strength as a samurai warrior.