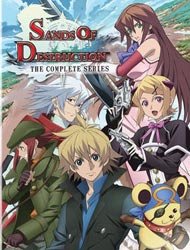 Plot Summary: Spinoff based on the Nintendo DS RPG game by SEGA, released in Japan July, 2008. In a world where humans serve as livestock for the ruling beastman, and where sand fills the roles of water and fire. Kyrie is recruited by the "World Destruction Committee" to assist in putting an end to their world. Kyrie alone holds the power needed to do it.