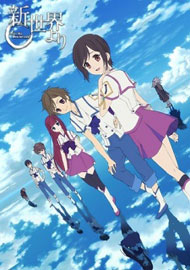 Plot Summary: The story is set in Japan a millennium from now. Five children—the protagonist Saki, Satoru, Maria, Mamoru, and Shun—have been born and raised in a tranquil town that can be described as a utopia, overflowing with water and green foilage. After a certain incident, Saki and the others come to realize the true nature of their world. The five throw themselves into life-threatening adventure and fighting to protect friends and a world on the brink of collapse.

Other name: From the New World, 新世界より