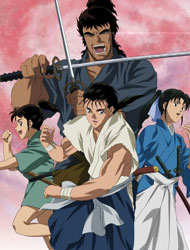 Plot Summary: Legends tell of an invincible martial art known as Mutsu Enmei-Ryu, an unarmed style that allows the user to defeat any number of armed opponents using incredible speed and strength. This is the story of three generations of those who bear the name Mutsu, and their encounters and battles with the strongest fighters of their era.