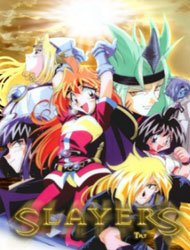 Plot Summary: Several months have passed (after the end of Slayers Next). The barrier put in place by the mazoku sublords has been broken, and as a result, Lina Inverse and her friends are allowed access to the outside world. There they become wrapped up in a prophecy stating that a dark lord from another dimension, Dark Star Dugradigdo, will enter their world and spread chaos.