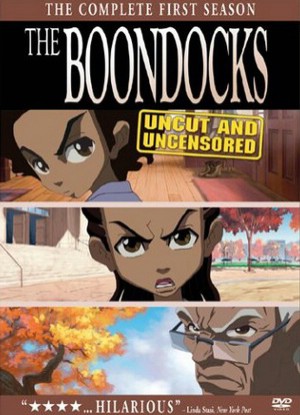 Plot Summary: The Boondocks is a social satire of American culture and race relations (or stereotypes in the world), revolving around the lives of the Freeman family – ten-year-old Huey, his younger brother, eight-year-old Riley, and their grandfather, Robert. The Boondocks takes place in the same place and time frame as its comic counterpart. The Freeman family, having recently moved from the South Side of Chicago to the peaceful, fictional suburb of Woodcrest, Illinois (compare Crestwood) find different ways to cope with this acute change in setting as well as the drastically different suburban cultures and lifestyles to which they are exposed. The perspective offered by this mixture of cultures, lifestyles, and races provides for much of the comedy in this series. Genres: Animated comedy, Black sitcom, Action, Satirical, Dark comedy