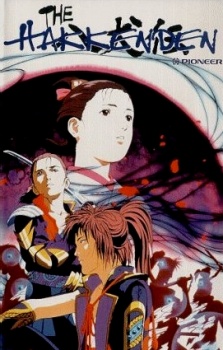 Plot Summary: "During the blood-soaked feudal wars of Japan, the Awa clan faced certain extinction from a rival clan backed by demonic forces. Their clan's salvation becomes a curse when the family dog brings back the head of the enemy warlord but insists upon marrying the lord's daughter! This unnatural union bears fruit, but they are killed; and their eight unborn pups reincarnate as the eight Dog Warriors - The Hakkenden. The eight reincarnated souls travel their separate paths of violence and retribution, but slowly they come together as a formidable group representing the eight virtues of the bushido to slay the demons and redeem their clan!"

Other name: The Hakkenden: Legend of the Dog Warriors; THE 八犬伝