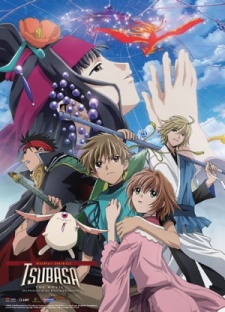 Tsubasa: RESERVoir CHRoNiCLE the Movie - The Princess in the Birdcage Kingdom (Dub)

Plot Summary: In their continuing journey to find the feathers that are the fragments of Sakura's lost memory, Syaoran, Kurogane, Fai, and Sakura move through time and space with Mokona. Here, they visit the "Land of the Birdcage," a seemingly peaceful country where people and birds live together, each person having a bird companion. After a boy named Koruri confuses Syaoran and Sakura for "bodyguards" and attacks them, they learn that the king of the country possesses a mysterious power. Princess Tomoyo, Koruri, and the other oppressed citizens, having had their birds taken from them, live in hiding within the forest. In order to take back Sakura's feather, Syaoran and the others stand up against the scheming king.

Tsubasa: RESERVoir CHRoNiCLE the Movie - The Princess in the Birdcage Kingdom (Dub)