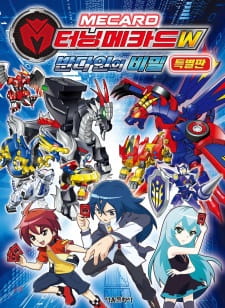 Plot Summary: It follows the fan favorite character Vandyne as his hidden secrets are revealed. Unlike the Turning Mecard R reboot, which exclusively uses 3DCG visuals, this series is like the earlier entries and is animated with 2D and 3D visuals. The mini-series is part of a new promotional campaign from Sono Kong. The Korean toy manufacturer will launch four new mechanimals this month at retail.