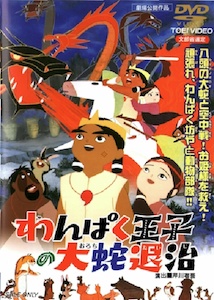 Plot Summary: This anime film tells the story of the god Susanoo (as a cute boy), whose mother Izanami had passed away. He was deeply hurt by the loss of his mother, but his father Izanagi told him that once she had died, she had gone to the heavens. Despite Izanagi's warnings, Susanoo eventually sets off to find her. Along with his companions Akahana (a little talking rabbit) and Taitanbo (a strong but friendly giant from the Land of Fire), Susanoo overcomes all obstacles in his long, wonderous voyage. He eventually comes to the Izumo Province, where he meets a little girl, Princess Kushinada, whom he becomes friends with (He also thought she was so beautiful that she looks like his mother Izanami). Kushinada's family tells Susanoo that their other seven daughters were sacrificed to the fearsome eight-headed serpent, the Orochi. Susanoo was so infatuated with Kushinada that he decided to help her family protect her and slay the Orochi once and for all, as he, Akahana and Taitanbo prepare for the spectacular showdown...