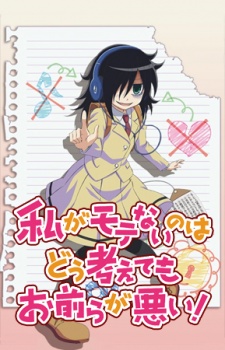 Plot Summary: Kuroki Tomoko is a super popular, high school girl who has had 50 years of dating experience and 100 boys... in the Otome game world. In the real world, she is a 15-year-old shut in who has all of the qualities of a "mojo" (a gloomy or unpopular woman). However, when school isn't going as she expected, and she isn't as popular as she had thought she was, she takes a look at herself in the mirror for the first time in a few years, and has some shocking revelations...

Other name: 私がモテないのはどう考えてもお前らが悪い!; Watashi ga Motenai no wa Dou Kangaete mo Omaera ga Warui!; It's Not My Fault That I'm Not Popular!; Watamote