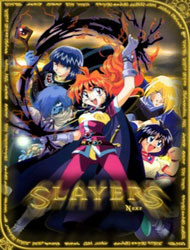 Plot Summary: Lina, Gourry, Zelgadis, and Amelia coincidently meet up again and begin to search for the Clair Bible. During their search they run into a mysterious priest named Xelloss who seems to know a thing or two about the passages they're looking for, but he tends to get them into more trouble instead of out of it. Furthermore, they discover that the Monster race has plans of their own, and as it turns out, Lina and Company just might be a big part of their evil intentions.