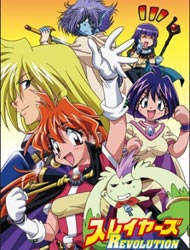 Plot Summary: Having lost the Sword of Light in the previous battle, Lina and Gourry continue their journey in search of a replacement weapon. On the way, the two of them meet up with Amelia and Zelgadis in the kingdom of Luvinagard while taunting some pirates. Lina is happy to reunite with her old friends, but appearing before her is Luvinagard's Inspector of the Special Investigative Unit; a man called Wizer. However, Lina is amazed at his unusual behavior...