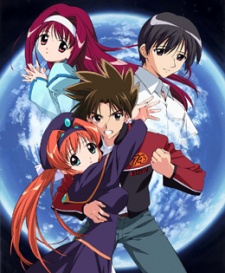 This Ugly Yet Beautiful World (Dub)

Plot Summary: High school student Takeru Takemoto works part time as a (motor)bike courier. During one of his deliveries, he saw a mysterious light passing him and fell into a forest. What he had found was a beautiful girl coming out from a glowing cocoon, calling herself "Hikari." While Takeru was quite embarrassed because of Hikari's nudity, a strange monster suddenly showed up and immediately attacked the two. Both Takeru and Hikari demonstrated the power of their other selves before Takeru had a clue of what's going on.

This Ugly Yet Beautiful World (Dub)